You Are At:Home»Tungsten News»Tungsten Oxide Electrochromic Film Has The Same Effect As The Boeing 787 “Dream Window”

The Boeing 787 "dream window" does not have a visor, but it can change the transparency, and the effect of this is the same - tungsten oxide electrochromic film.

The porthole of the Boeing 787 has no visor, but it can change the transparency! You only need to press the button; the porthole will become a "chameleon" until it is completely darkened! Of course, the captain can also dim directly from the cockpit when the night falls. In addition, because the color change process of this "electronic curtain" is gradual, you don't have to worry about the eyes being uncomfortable. What's more, when an unexpected power outage occurs, the portholes become completely transparent and comply with relevant aviation standards. At this point, some readers may ask, "So, can you easily put the Boeing 787 'magic window' home?" This just seems impossible. In fact, only need - the tungsten oxide electrochromic film black technology can give you Boeing 787 enjoy.

Electrochromism refers to a phenomenon in which the optical properties (reflectance, transmittance, absorptivity, etc.) of a material undergo a stable and reversible color change under the action of an applied electric field, and the appearance is a reversible change in color and transparency. So what is the principle of electrochromism? The principle of electrochromism is the use of electrical energy to change the color of a conductive medium sandwiched between two layers of glass, such as a thin film or a thin layer of gel. Current flows through the transparent conductive layer on the inside of the outer glass, causing a chemical reaction of the electrochromic medium, causing a change in the transparency of the medium. The principle of discoloration specific to the tungsten oxide electrochromic film is that the tungsten oxide electrochromic glazing uses a tungsten trioxide film as a medium, and a small voltage is applied to the film to darken it, and the film is recovered after the power is turned off. To the natural state of transparency. This process voltage can be precisely controlled, and by adjusting the amplitude to increase or decrease the voltage, the required transmittance can be obtained.

In fact, this kind of glass can be said to be a kind of smart glass. Under the action of electric field, it has the adjustability of light absorption and transmission, and can selectively absorb or reflect the external heat radiation and the internal heat diffusion, thereby reducing civilian use. Residential and office buildings are “cool” in the summer and “warm” in winter and consume a lot of energy. In short, they are four words – energy saving and emission reduction. At the same time, this smart glass also aims to improve the natural light level and prevent peek.

WO3 applied in electrochromic glass picture 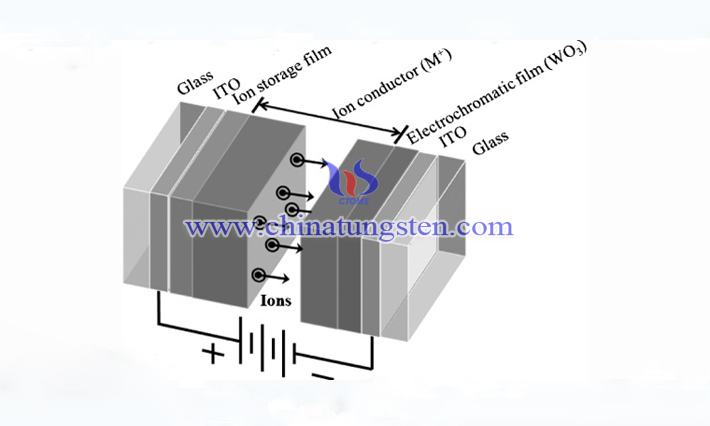