You Are At:Home»Tungsten News»Preparation of Photochromic Tungsten Oxide by Sol-gel Method

At present, tungsten oxide has been widely used in chemical sensors, optoelectronic devices, fuel cells and other fields. It is a new hot spot in the research of nano-metal oxides. However, the current domestic research on nano-tungsten oxide materials is mainly concentrated in the two advantageous areas of electrochromic and gas sensors. There are few studies on the photocatalytic and photochromic properties of tungsten oxide, especially for sol-gel preparation. The research on photochromic tungsten oxide is rarely reported in China. 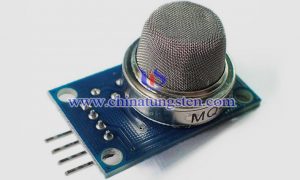 The specific steps for preparing tungsten oxide nanocrystals by a sol-gel method are as follows:

1) Dissolve polyvinyl alcohol or polyvinylpyrrolidone in distilled water to obtain a polymer solution with a mass concentration of 10-20%.

3) Mix the polymer solution and the ammonium metatungstate solution at a volume ratio of 10:1, and after the dispersion is evenly dispersed, let it stand until the bubbles disappear to obtain a mixed solution.

4) Pour the mixed solution into a burning boat, put it in a muffle furnace and calcinate at 550-900°C for 4-8 hours, and then cool down naturally in the furnace to obtain a yellow powder of WO3 nano-crystalline powder.

The discoloration mechanism of tungsten oxide can be explained by the double charge and injection/extraction model proposed by Faughnan in 1975, that is, under ultraviolet light irradiation, electrons in the valence band are excited into the conduction band, and then the photogenerated electrons are captured by W(VI) to generate W(V), at the same time, photo-generated holes oxidize the reducing species inside or on the surface of the film to generate protons H+, which are injected into the film and combine with the reduced oxide to form blue tungsten bronze HxWO3. The blue color is due to W(V) The result of the transition of electrons in the valence band to the W(VI) conducti on band.