You Are At:Home»Tungsten News»Report on the Development of China’s Tungsten Industry 2021 (II) 2.1 Overview of Economic of China

According to the statistical analysis of CTIA, in 2021, the output of tungsten concentrate of China was 135,500 tons (converted into WO3, 65% tons, hereinafter referred to as standard tons), a year-on-year decrease of 2.25%. The national output of APT, tungsten carbide powder, tungsten cemented carbide and ferrotungsten increased by 9.52%, 29.04%, 24.39% and 20.00% respectively year-on-year: the economic situation at home and abroad improved and the recovery of demand driven the restorative growth of production and operation of tungsten industry. The output of tungsten products in recent 5 years is shown in Figure 2. 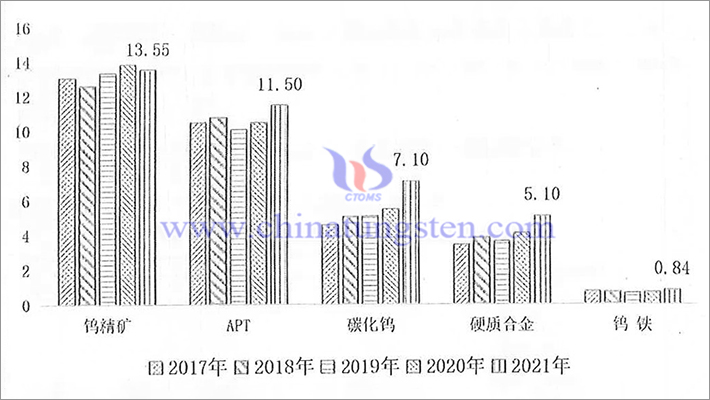 The Sandgong Tungsten, also known as the Almonty Korea Tungsten is a historical mining site in South Korea that is currently being developed by Canada-based Almonty Industries through its wholly-owned subsidiary, Woulfe Mining Corp.

2.1.3 Tungsten Industry has Improved Better as Income has Reached a Record High

Figure 4 Proportion of APT output in Jiangxi, Hunan and Fujian in 2021 (CTIA)

The producing areas of tungsten cemented carbide are mainly distributed in Hunan, Fujian, Jiangxi and Sichuan. In 2021, the total output of the four provinces was 35,600 tons, accounting for 70% of the national output, which was basically the same as that of the previous year. Among them, the output of Hunan accounted for 34% of the national output, ranking first. Among the four provinces, the output of Fujian increased by 33.50% year-on-year, with the fastest growth. See Fig. 3, 4 and 5 for the output proportion of main production areas of tungsten concentrate, apt and tungsten cemented carbidein 2021. Ammonium paratungstate(APT) is one of the tungstate salts. Its appearance is white powder crystal, and its molecular formula is (NH4) 10w12h2o42 • 4H2O. It is slightly soluble in water and stable in air at room temperature. It begins to decompose into WO3 at 25 ℃. It is an intermediate product of tungsten industry and the main raw material for the production of tungsten oxide. Tungsten oxide is obtained by calcining at 700-800 ℃. APT can be purified by evaporation crystallization. The pH value largely determines and affects the physical and chemical properties of APT.

Tungstens’ market prices rose moderately and returned reasonably. In 2021, major economies implemented loose monetary and fiscal policies and actively responded to the impact of the epidemic. The recovery momentum was obvious, which led to the recovery and stable operation of the tungsten market. Compared with other metals, the market price of tungsten has increased moderately and gradually upward, which is generally in the market equilibrium range in recent years. Tungsten mines in open pit mining, Jiangxi, China. The content of tungsten in the earth's crust is only 0.007%, of which more than 50% is in China. China's tungsten reserves are mainly distributed in Hunan, Guangdong, Jiangxi, Fujian, Henan and other provinces; Jiangxi is the most concentrated in the south, Daji mountain, Xihuashan, Kuimeishan and Pangushan are all world-famous tungsten mines located in Jiangxi. After tungsten ore is mined from tungsten mine, tungsten concentrate is produced through technological processes such as crushing, ball milling, gravity separation (mainly shaking table and jigging), flotation, electric separation and magnetic separation. The content of tungsten trioxide, the main component, can reach more than 65%. Tungsten concentrate is raw material for the production of tungsten compounds such as ferrotungsten, sodium tungstate, ammonium paratungstate (APT) and ammonium metatungstate (AMT) and then processing tungsten trioxide (YTO), blue tungsten oxide (BTO), violet tungsten oxide (VTO, Purple Tungsten), cesium tungsten, nano tungsten oxide, tungsten powder, tungsten carbide, cemented carbide, tungsten steel and tungsten bar. All news and prices of China Tungsten products, please visit news.chinatungsten.com. 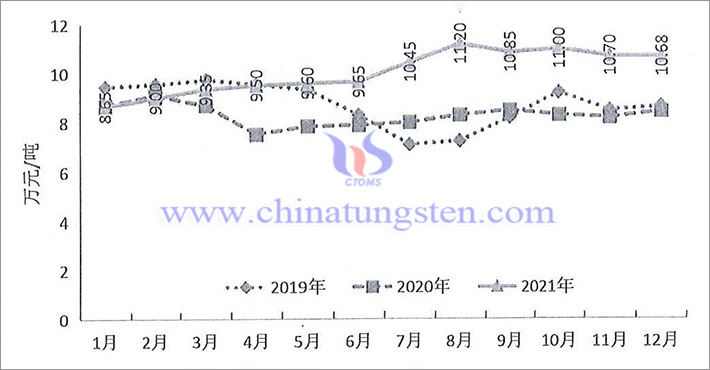 In December 2007, Wolf Minerals, a special metals exploration and development company, acquired Hemerdon Tungsten Mine and renamed it Drakelands Tungsten Mine (DTM). In May 2011, wolf minerals completed the feasibility study of the DTM project and officially put into operation in 2015. However, the mine has never achieved its mining or financial objectives. In October 2018, Wolf Minerals was overwhelmed and went bankrupt after losing £ 100 million. The DTM was announced to be closed again. In November 2019, Tungsten West acquired the DTM with £ 2.8 million in cash. At present, feasibility study and further financing plan are under way to restore the production activities of the mine in 2021. The restart cost is expected to be £ 30-40 million. Tungsten West hopes to fill the gap in the tungsten concentrate market outside China through the DTM. 2.4 Import and Export of Tungsten In 2021, the import of tungsten products was 5,986 tons (converted into metal volume, the same below), with a year-on-year increase of 13.07%, with positive growth for two consecutive years, slightly higher than the average level in recent five years. Tungsten concentrate and tungsten cemented carbideare the main imported products. In 2021, 2,656 tons of tungsten concentrate were imported, with a year-on-year increase of 62.60%, accounting for 44.37% of the total import, an increase of 13.52 percentage points over the previous year; 1400 tons of tungsten cemented carbidewere imported, down 6.67% from the previous year. See Figure 10. 2.4.2 The Four Major Export Destinations Increased Significantly Except the US 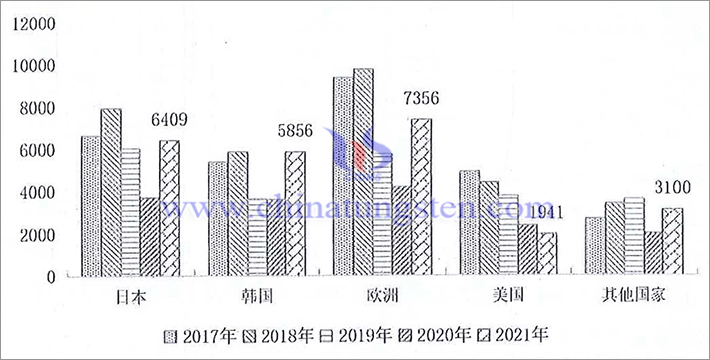 In 2021, the tungsten producers of China carefully planned a number of key projects around industrial transformation and upgrading, process and technology innovation, product optimization and quality improvement, which promoted the green and intelligent development of the industry and provided strong support for the high-quality development of the industry. The technological transformation of tungsten carbide powder intelligent production line of Zhuzhou Cemented Carbide Group, a branch of China Tungsten High Tech Co., Ltd, the CNC blade production line of Zigong Cemented Carbide, another branch of China Tungsten High Tech, the underground 5g network construction for mining of tungsten ore in Shizhuyuan Nonferrous Metals Co., Ltd. have been completed. Meanwhile, Ganzhou Industrial Park project with a total investment of 10.2 billion RMB Yuan by Jiangxi Tungsten Holding Group has been started, and the phase I construction of an annual output of 10,000 tons of tungsten powder and 8000 tons of tungsten carbide powder line，tungsten powder and tungsten cemented carbide mining production line of Xiamen Jinlu Haicang Tungsten Cemented Carbide Industrial Park (phase II) with a total investment of 2 billion yuan by Xiamen Tungsten are also have been started, and the annual output of construction has been increased 12000 tons of tungsten powder, 11,200 tons of mixture tungsten carbide powder (tungsten ready to press powder), 2000 tons of tungsten carbide mining tips production line and supporting facilities; With a total investment of 560 million RMB Yuan, the main infrastructure of the industrialization project of Lugu Base of Boyun Dongfang with an annual output of 2000 tons of high-efficiency and precision cemented carbide tools and high-strength and toughness extra coarse-grained tungsten cemented carbide tunneling tools has been completed.

"Report on the Development of China's Tungsten Industry 2021"